Is Christianity Based on Fear?

I recently introduced my readers to Chaz Bufe, conspiratorial anarchist and religion bashing pamphleteer. Chaz wrote a gut-wrenching indictment against the Christian faith,

There is nothing particularly new with the 20 reasons Chaz offers as to why we need to abandon Christianity.  He repeats the standard, cliched criticisms any well-read Christian has already encountered years ago.

Moreover, Chaz’s “reasons,” if we even grant him that word to describe his points, are not too terribly thoughtful. It is painfully clear with the glaring absence of meaningful interaction with any serious Christians that Chaz is in a blindfolded pinata game swinging wildly at strawmen caricatures of Christians, not actual Christianity.

Now before I begin with evaluating his first point, it may be helpful to clarify some terminology.  Is it fair of me to describe Chaz and his atheistic anarchism as “foolish?” Sounds a bit harsh to some, but I believe I am aptly defining my terms and I can defend my assertion.

First off, rather than playing fantasy games of pretend neutrality where I insist I am an unbiased person as most atheists do, I admit my bias up front. I am a Bible-believing Christian who uses God’s revelation as my ultimate starting point for evaluating my world and perceiving reality. I will even go further and state that Chaz does the same as well, even though he will vehemently deny it.

But as much as Chaz, or any atheist for that matter, wishes to carry on about being an unbiased free thinker, he doesn’t have any justification for his objections against my Christian worldview unless he steals principles of judgment from my worldview in order to declare it worthless and in need of abandonment. In other words, a person cannot make appeals to “logic” and “reason” unless there is something setting the rules for logic and reason that exists outside the person.

Chaz the anarchist atheist has no explanation for his ability to use logic and reason. He just blissfully makes unwarranted absolute declarations that Christianity is illogical and unreasonable all the while insisting there are no absolutes. Nothing is more amusing than a know-it-all who denies absolutes who absolutely believes I am an idiot for believing in the absolutes of Christianity.

Yet more importantly, the Bible declares Chaz’s Christian bashing as being foolish. God’s Word distinguishes between the wise and the foolish. Wisdom, as defined in scripture, begins with the fear of the Lord (Proverbs 1:7, 9:10).

Basically, true wisdom is a God-centered worldview of a person who recognizes his Creator, submits to His authority, and lives his life according to God’s revealed principles as outlined in Scripture. A fool, on the other hand, rejects all knowledge of God and refuses to live according to His precepts.

The key passage for this truism is Psalm 14:1, The fool has said in his heart, no God. Some translations add the words “there is” immediately before “no God,” but those words are not in the Hebrew text. The point is not that the fool has honestly, with a sincere heart, searched around looking for God, found no evidence satisfying his inquiry, and then determined there is no God. The fool knows there is a God, but rejects God, desiring to have nothing to do with Him. What Paul describes as suppressing the truth (Romans 1:20ff.)

So with these things in mind, let us consider Chaz’s first reason to abandon Christianity, Christianity is based on fear. He writes:

1. Christianity is based on fear. While today there are liberal clergy who preach a gospel of love, they ignore the bulk of Christian teachings, not to mention the bulk of Christian history. Throughout almost its entire time on Earth, the motor driving Christianity has been – in addition to the fear of death – fear of the devil and fear of hell. One can only imagine how potent these threats seemed prior to the rise of science and rational thinking, which have largely robbed these bogeys [sic] of their power to inspire terror.

But even today, the existence of the devil and hell are cardinal doctrinal tenets of almost all Christian creeds, and many fundamentalist preachers still openly resort to terrorizing their followers with lurid, sadistic portraits of the suffering of nonbelievers after death. This is not an attempt to convince through logic and reason; it is not an attempt to appeal to the better nature of individuals; rather, it is an attempt to whip the flock into line through threats, through appeals to a base part of human nature – fear and cowardice. 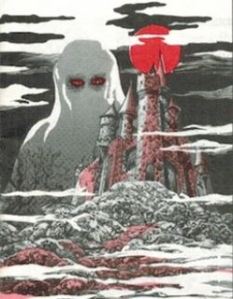 I am taking it that the type of fear Chaz has in mind is that psychotic fear probably smacked into him by nuns at his Catholic church who believed he had an impure thought. Nuns smacking you after misreading your mind can certainly be a fearful thing.

Or perhaps he is thinking about the sort of fear that swirls around in the theological cesspools of Independent, Fundamental Baptist churches. You know, the delusional fears we see played out before us in various Chick tracts and Crusader comics in which a young gal who plays D&D becomes a devil worshiper.

I remember the backward masking craze in the 80s. All of those rock and roll bands singing about drugs and women were really demonically inspired, and if you knew how to rig your record player so as to spin backward, out of those exact same songs would come voices telling you to worship Satan, commit fornication, snort cocaine, or do any number of evil, unwholesome activities. I used to be fearful of accidentally hearing Queen’s “Another One Bites the Dust” because if you heard that song backwards, the devil in Freddy Mercury’s distorted voice told you to smoke marijuana (or maybe it was “eat an iguana”), and even though the only illicit drugs I had ever taken in my entire life was a pinch of my grandma’s chewing tobacco, I was certain if I heard that song just once, I’d instantly become a pothead.

Another example is Bill Gothard. He was notorious for spreading around spiritual paranoia, and one of his well-known targets was cabbage patch kids. He used to tell the story about a girl who received a cabbage patch kid doll for her birthday, and shortly after receiving the doll, she loses her appetite and refuses to eat.

Days go by without her so much as drinking a glass of milk and the parents get worried and take her to the doctor. He can’t find anything physically wrong with her, but notices she is carrying her CPK doll with her to the visit. The swift thinking doctor asks her what the doll’s name is, and the kid responds by giving him some funny sounding foreigner name that turns out to be the Hindu goddess of famine. “That’s the reason!,” exclaims the doctor (who just so happens to be a Bill Gothard trained Bible institute instructor. How providential is that!), “The demon of famine has binded its spiritual authority to your daughter causing her to starve. You must burn this doll immediately to break the curse!” And of course, once the reluctant parents, ignoring the pleading cries of their traumatized daughter who doesn’t want to give up her doll, commit it to the purifying flames of a trash barrel, the kid gets her appetite back.

If that is the kind of fear Chaz has in mind, I’d be more than happy to join him on stage at one of his blues festivals and renounce that superstitious nonsense along with him.

Yet, a bunch of goofy people who claim to be Christians, but teach foolish things about cabbage patch dolls and listening to CCM, is a far cry from what the Christian faith actually teaches about fear. The Scriptures are clear: we are to only fear God, as I noted above, which is a healthy fear all humanity should cultivate. (See also Deuteronomy 6:2, 13, 24; Psalm 2:11, 33:18; Ecclesiastes 12:13,14). If Chaz, or any atheist for that matter, fools himself into believing such fear is enslaving and causes suffering, then so be it. But in truth, it is a lack of the fear of God that is dangerous and ultimately destructive.

You see: Chaz doesn’t let on to his readers that atheists have their own fears, the biggest one being death. That is the reason he so hates the doctrine of eternal punishment. Atheists are men and women created in the image of God. They know they are law breakers against a holy God and that judgment awaits them. Oh, he may be cocky; like a lot of atheists who smugly dismiss my analysis here and insist that they are not at all afraid of my silly sky wizard man or whatever derisive, blasphemous term the come up with to speak against their Creator in a lame attempt to excuse themselves.

It’s usually when death is imminent that all the fear begins to manifest. They’ll get angry and curse God, but it doesn’t bring relief from the fear. Sometimes the anger really intensifies when it is pointed out to them by the theist that according to their own worldview, they are nothing but matter in motion — evolved stardust —  and when they terminate, they will simply shut down and there is no consciousness afterwards. Why the anxiety?

I encountered such behavior among a group of atheists a few years ago when a well-known atheist blogger died suddenly from a massive heart attack. I wrote about it a bit HERE. When the grieving friends were told that a meat machine made of evolved stardust basically ceased functioning, they became enraged.

They wanted so badly to keep their memory of him alive. They tried to take solace in the anger they have toward eternal judgment by claiming he wasn’t being tortured somewhere or forced to worship a tyrannical god. There was a lot of faith in those words. Faith and fear. But regrettably, it was a blind faith with no certainty, but the fear was very much real.

So Chaz can complain about Christianity imposing fear upon its adherents, and certainly there is something to say about the superstitious anxieties produced in the fever swamps of fundamentalists, but those are fears that will evaporate when the true light of the Gospel and God’s Word shines in the hearts of those misdirected and disillusioned believers. However, true fear that lurks in the shadows of Chaz’s heart not only enslaves him, but will rise up to condemn him when he stands before the God in whose face he shakes his fist.