The recent publishing scandal involving Tyndale recalling the book, The Boy Who Came Back From Heaven, raises serious questions about the validity of those people who claim they visited heaven.

Whereas some speculate that the scandal may sink the genre of what has been labeled, “heaven tourism,” it may surprise folks that such fantastical tales are ubiquitous in both secular and Christian circles and have been retold for decades.

While there is a rather large niche among non-Christian, new age mystics who claim they have visited the afterlife or “the other side,” the more agonizing concern in biblical Christianity is what looks to be the never ending testimonies of Christians touring heaven. Many of those stories, as we will see, have been published in best selling books over the years. They have become a pestilence of sorts, especially among Pentecostals and charismatics groups where heaven touring testimonies are renown and have historically been promoted.

The examples are so numerous, it is near impossible to report on all of them in one place. Allow me to highlight just a few:

For instance, self-appointed church historian, Roberts Liardon, who writes hagiographies chronicling the fabricated supernatural tall tales of various Pentecostal luminaries in history past, tells his own incredible story of visiting Jesus in heaven.

Listen to Liardon recount his fantasy of visiting heaven, not once, not twice, BUT THREE TIMES! He splashed around with Jesus in the “River of Life” and tells us how angels are like 6 to 8 feet tall and make music with their wings,

Rolland Buck was an Assemblies of God pastor in Boise, Idaho, who says he went to heaven. In fact, I recall being in a small, Christian bookstore many years ago in my hometown in Arkansas and finding the book, Angels on Assignment, that recounted his heavenly experiences.  I was a fairly new believer, but the stories told in it were unbelievable. 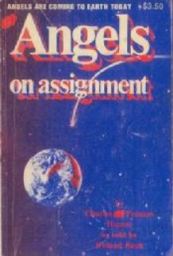 Buck claimed that between 1978 and 1979, he, along with his great Dane, Queenie, was visited by the angel Gabriel 27 times. Mary only got one visit, so go figure. During one of those visits, he was taken into the “Throne Room of God,” whereupon he was shown a massive archive room filled with file folders (computer digitization hadn’t reached heaven at that time yet) that contained all of God’s plans for each and every person on earth. God also told him about black holes, which were confirmed to him many months later by a scientist friend of his who told him of the new discovery of “black holes.” The entire book can be read online, Angels on Assignment

Kenneth Hagin claims that in 1950 at a tent revival in Texas that Jesus called him up to heaven. He retells the story,

Everyone was praying around the front, and I knelt on the platform beside a folding chair near the pulpit. I began to pray in other tongues, and I heard a voice say, “Come up hither.” At first, I didn’t realize that the voice was speaking to me. I thought everybody heard it. “Come up hither,” the voice said again. Then I looked and saw Jesus standing about where the top of the tent would be. As I looked up again, the tent had disappeared, the folding chairs had disappeared, every tent pole had disappeared, the pulpit had disappeared, and God permitted me to see into the spirit realm. … Then Jesus said to me again, “Come up hither.” It seemed as if I went with Him through the air until we came to a beautiful city. We did not actually go into the city, but we beheld it at close range as one might go up on a mountain and look down on a city in the valley. Its beauty was beyond words! [I Believe in Visions, 43-44]

Dr. Richard Eby experienced an accident in which he fell from a balcony that caused his head to split open. Initially, he couldn’t remember anything about the fall, but then later, as he recounts in his book, Caught Up Into Paradise, he was taken up into heaven and experienced many amazing and wonderful sights. He also notes how there are no bodily organs like bones or blood vessels, and for some bizarre reason, no one has any genitals, because as he explains, “there is no need for sex in heaven.” I am guessing everyone turns into a Ken or Barbie doll upon dying and entering the afterlife.

One of the absolute worst culprits to promote heaven tourism stories is Sid Roth.  Simply search “Sid Roth + heaven stories” and you will find an extensive list of various programs of his show, “It’s Supernatural!,” during which he interviews a hodge-podge of individuals  claiming to have visited heaven. Roth even published a book with 10 testimonies of heaven tourists titled, Heaven is Beyond Your Wildest Expectations.

Roth has interviewed many folks about heaven including Norvel Hayes, Dean Braxton, Steven Brooks, and Gary Wood, who claims he saw a big room in heaven with replacement body parts just waiting for people to ask for them.

Probably one of the more creepy heaven stories, in a Jim Jones grape cool-aid sort of way, comes from Deborah Reed, who once was the children’s ministry leader at Bethel Redding. She could clearly become the first recipient of the “Mill Stone” award (Matthew 18:6, Mark 9:42, Luke 17:2), as she essentially tells how the cult at Bethel lead little children astray by teaching them all sorts of bizarre and strange new age like practices. The last one she notes is mentioned here in this video, where Reed says how they train kids to take trips to heaven.

Now certainly I will have Pentecostal believers accuse me of being unfair. The examples I cite are in the fringe elements of charismatics and Pentecostals. I got that a lot back when I wrote on the Strange Fire conference. Some may even vehemently insist their churches do not promote such nonsense. Great! I am definitely encouraged by those assertions.

The reality, however, is rather stark. Thousands of people purchase the books and flock to hear the testimonies of heaven tourists, and the main culprits who devour them are charismatic and Pentecostals. Why is that?

Rather than getting all defensive that someone pointed out that obvious problem among charismatics and Pentecostals, I would think a better response would be to consider why they gravitate to heaven tourism stories. I don’t typically see the problem among Presbyterians, Reformed Baptists, or any of the Bible Fellowship style churches. If a Pentecostal or charismatic is seriously opposed to heaven tourism, they’d evaluate the reason why.

I suggest that is because Pentecostal and charismatic believers are doctrinally imbalanced when it comes to so-called supernatural manifestations. They are led to an experience driven theology that in turn causes them to be way more susceptible and undiscerning with these fantasies. It then becomes difficult to distinguish between a flim-flam hustler and a sincere, but confused person who exaggerates odd dreams he had after having a dangerous surgery, as traveling to heaven.

Moreover, it your theology has God regularly performing unusual manifestations and the supernatural is to always to be expected, who is to truly say a person did or didn’t get caught up into heaven?

We can only hope that the recent scandal with the Boy Who Came Back From Heaven will cause Christians to develop their spiritual discernment a bit more, but honestly, until their is a seismic shift in the practical theology of charismatics and Pentecostals, heaven tourism books aren’t going away.

11 thoughts on “The Pestilence that is Heaven Tourism”