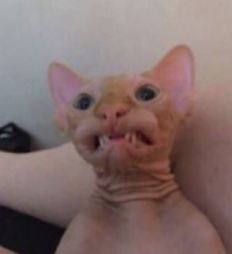 Back a few months ago I posted a theological geeky article entitled, Historical Science, Observational Science, and Creation. I was interacting with the challenges of an old earth proponent by the name of Luke Nix who maintains his blog called Faithful Thinkers.

But, as Luke goes on to suggest, when they make that distinction and try to argue for their position, YEC are simply arguing falsely and are really just giving a reason for Youtube atheist to point and laugh at Jesus. Most importantly, it also cuts against his old earth views that he insists are necessary to make Christianity look rational in the eyes of the skeptic.

In my critique of his article, I tried to show that Luke had manufactured something of a strawman. He starts with inaccurate definitions of what origin and operational science means and from there forward the major criticisms he levels against YEC its use of the distinction falls rather flat. Not only that, but I noted two major pioneer books in the debate between evolutionists and creationists that addressed the very topic of origin science vs. operational science. They specifically utilized the distinction as a key, apologetic talking point and they were written by old earth creationists years before AiG even came into the worldview arena.

I notified Luke for his feedback after I posted my article. I didn’t hear back from him at first, and it wasn’t until around Christmas break that he acknowledged my post. He thanked me for the critique and said he’d respond. And true to his word, he did shortly after the new year. His rebuttal attempts to take me to task,

Historical Science, Observational Science, and Creation – A Clarification and a Critique

I have to confess I was a bit disappointed with his response. Primarily because he didn’t even attempt to interact with my review and rebuttal of his major arguments he claims refutes the alleged false dichotomy YEC make distinguishing between historical and operational science.

I will say, however, that I was appreciative of the fact that he at least reluctantly acknowledged the philosophical implications of his position. In other words, he acknowledges the fact that YEC consider (rightly, in my mind) historical science inadequate as a source of knowledge and truth. That’s because historical science relies heavily upon indirect, circumstantial evidence. Indirect, circumstantial evidence must be interpreted and so the majority conclusions that are often times extrapolated from those interpretations are heavily dependent upon the presuppositions of the person making them.

Luke, however, totally rejects that historical science is fraught with those philosophical notions. So much so that he charged me with misrepresenting the authors of those two works I noted. He even claims they affirm his position. That got me all riled up and I am going to show you that such is hardly the case.

Let me begin with The Mystery of Life’s Origins written by Charles Thaxton, Walter Bradley, and Roger Olsen. Again, a scanned PDF of the book is available online HERE.

The authors spend a number of pages in the epilogue discussing the distinction between origin/historical science and operational science. I didn’t provide any citations in my first article because that wasn’t my point; but seeing that Luke insists I’m misrepresenting those men, I’ll provide selective quotes.

First, regarding the definition of operational science the authors write,

Notice, however, that this approach to testing theories only works if there is some pattern of recurring events against which theories can be checked and falsified if they are false. Through repeated observation attention is focused on a class of events, each of which is similar. The equations describing the behavior of the class would be applicable to any of its individual members. Let us say,for example,we have a theory about earth orbiting the sun and we propose to test it by predicting a solar eclipse. Although a particular eclipse would be the focus of the experiment, the result would apply to solar eclipses as a general class. Because there are recurring patterns of celestial movements we can test the theory. Such theories are operation theories. That is, they refer to the ongoing operation of the universe. We shall call the domain of operation theories operation science for these theories are concerned with the recurring phenomena of nature. [Mysteries, 202 (of the printed edition)].

But what about origin/historical science? The authors write,

On the other hand an understanding of the universe includes some singular events, such as origins. Unlike the recurrent operation of the universe, origins cannot be repeated for experimental test. The beginning of life, for example, just won’t repeat itself so we can test our theories. In the customary language of science, theories of origins (origin science) cannot be falsified by empirical test if they are false, as can theories of operation science. [Mysteries, 204 (of the printed edition)]

They continue by explaining that the only way to investigate origins is similar to sleuthing a murder. Why that sounds exactly like what Luke is saying. The authors, however, go onto to write,

Such scenarios of reconstruction may be deemed plausible or implausible. Hypotheses of origin science, however, are not empirically testable or falsifiable since the datum needed for experimental test (namely,the origin) is unavailable. [ibid]

In other words, one has to bring his interpretations to the evidence. Interpretations fall into the realm of philosophical presuppositions. For the average, secular old earther, that excludes the supernatural and God creating.

Now coming to the second book, Origin Science by Norman Geisler and Kerby Anderson (excerpts are available online HERE, specifically the introduction that lays out the thesis), Luke says I make the “grave error” of ignoring four key categories of science the authors mention by zeroing in only upon the third category, historical science, and conflating it with origin science.

Really? That is a rather puzzling accusation. The authors identify only two major approaches to science (not four “types” of science as Luke states), observed and unobserved. Those two approaches are then each broken into two further categories: singularities and regularities. The category of singularity is broken into two further categories, primary causes and secondary causes. See this diagram, 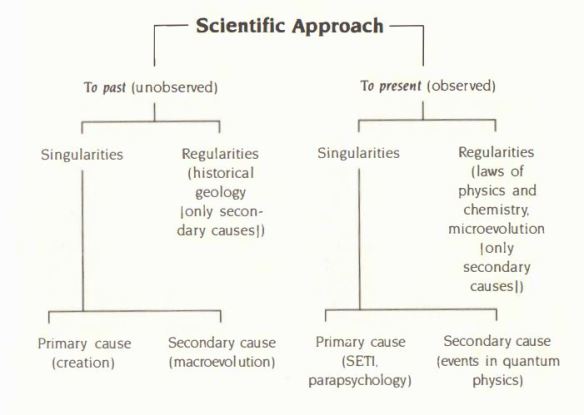 Luke is faulting me for ignoring the concept of “regularities” under the first category of the unobserved past and conflating them with the concept of “singularities.” In Luke’s view those so-called historical regularities like geology are dependable for providing us knowledge about the ancient world. Hence, geological forces that we see today are analogous to geological forces 40 million years ago, so it is erroneous to call that “origin science” and that the historical science is unreliable. That way he can maintain his views of deep time and accommodate secular views of an ancient earth and Reasons to Believe can keep chugging along.

However, Geisler and Anderson both acknowledge that historical science in the past is based upon assumptions experienced only in the present and applied to the past. In other words, philosophical presuppositions. They write,

A science about the past does not observe the past singularity but must depend on
the principle of uniformity (analogy ), as historical geology and archaeology do. That is, since these kinds of sciences deal with unobserved past events (whether regular or singular), those events can be “known” only in terms of like events in the present. [Origin Science, 14]

It’s that “known only in terms of like events in the present,” part that is problematic and what YEC like the speakers of AiG object to. That’s because what is always “known” in the present may not be what happened in the past. Sure, it may be the probable, educated guess, but again that is an assumption. That is especially true if the science is laying out a radically different story of historical events than what is revealed in Scripture.

And then one last comment before closing out. Luke claims I am ignoring Jeremiah 33:25,26 in support of his take on the reliability of historical science. Jeremiah writes,

Thus says the LORD: If I have not established my covenant with day and night and the fixed order of heaven and earth, then I will reject the offspring of Jacob and David my servant and will not choose one of his offspring to rule over the offspring of Abraham, Isaac, and Jacob. For I will restore their fortunes and will have mercy on them.

Jeremiah states something similar in 30:35-37. The idea being that God’s promise to restore Israel through the New Covenant of Christ is as certain as the fixed order of the astronomical events like the sun rising and setting.

But is Jeremiah’s revelation really affirming the wildly unbiblical apologetics of Reasons to Believe and other so-called old earth creationist attempts to accommodate the reading of Scripture with secular science? Of course not.

Why this is an important discussion is because of what Luke’s disagreement ultimately comes down to. He believes, for example, that the secular geological “evidences” against a global flood of Noah are reliable and should be accepted. Hence, the biblical text of Noah must be interpreted to be just a regional flood, not a global one.

Yet what exactly is the authority, then? Do we read the biblical account and understand the geological evidence in light of what the inspired biblical text emphatically states, that Noah’s flood was worldwide in its extent in spite of consensus “expert” opinion? Or do we re-read the Bible in light of the evidence, accommodating the claims of secular geologists who by default exclude a worldwide flood?

Now Luke, along with other deep time creationists, will say there truly isn’t any conflict. They’ll insist they never have to relinquish the authority of Scripture. They are merely harmonizing it with God’s “general revelation” or some such nonsense. But where exactly does that harmonization end?

The pseudo-Christians of Biologos insist all the genetic evidence stands opposed to a real, historical, biblical Adam uniquely created as a full formed man. They’ll equally insist they are using the same principles of induction and past regularities established by analogy in the present just like Luke says are reliable. But surely he will not follow them to their conclusions that the Bible is errant or we must re-interpret the Genesis account according to some fabricated genre that strips it of any historical reality? I don’t believe that is a direction even he is willing to take.

By the way, Neil still thinks you’re an idiot, 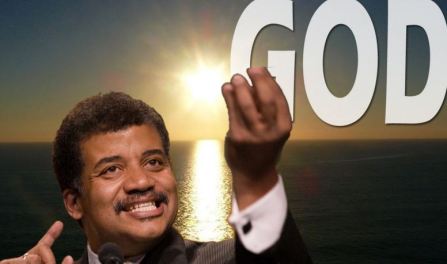 10 thoughts on “Historical Vs. Origin Science – A Rejoinder”