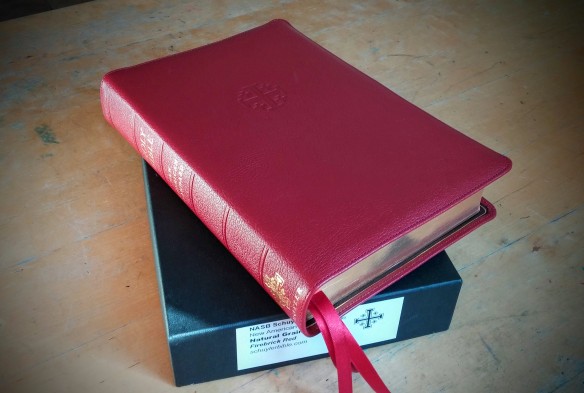 I remember, after the Lord saved me, receiving my first official Bible as a brand new Christian. Sure, I had a stubby, little gift KJV Bible my mom bought me when I was in 6th grade after I completed my confirmation classes at my old United Methodist Church, but receiving a new Bible after I came to know the Lord was extra special.

It was a Ryrie Study Bible (I still have it), black, genuine leather in the King James. It is filled with my hand written notes and yellow marker hi-lights I made on verses as I began to fully understand biblical truth for the first time. I am sure readers may be familiar with what I am talking about because you probably have the same kind of Bible somewhere in your house.

A couple of years later, my mom asked me what I wanted for Christmas and I requested a KJV super wide margin Bible.  At the time, those Bibles were packaged in cheap, bonded leather, (the new versions come in Moroccan leather), but it was thin and carried nicely in my hand. The interior was awesome with the massive wide margins where I wrote copious study notes (and lots of KJVO apologetic stuff). That Bible looked sweet at first. It even had Authorized Version 1611 on the spine (though it was a 1769 text). However, within a few years of use, the edges began rubbing off and the backing starting coming loose. The bonded leather was slowly deteriorating and it started to look ugly. I still have that Bible as well.

By 1997, I was in California attending seminary and working at Grace to You. That was the year the John MacArthur study Bible, in the NKJV, was published. I secured a copy of it in a nice leather version, but within a few years, it too began to look worn. Later, I was able to get the ESV MacArthur study Bible, as well as find a slightly damaged NASB edition I rescued from a give-away bin. The Crossway ESV edition of the MSB is fantastic, by the way. Excellent craftsmanship for a mass produced Bible.

I have pretty much used those two Mac Study Bibles as my primary reading/studying/carrying to church Bibles for the last 5 years or so. Recently, I began taking up only the NASB edition and reading it. I like the translation of the NASB, even though the ESV is the go-to translation these days. Yet once again, that Bible is showing the signs of wearing out with use. It is only a matter of maybe a year before it begins to fall apart, too.

My first thought was to mail it into a place that specialized in rebinding old books and Bibles, like ACE Book Binding, to put on a new cover. They did my wife’s first edition MacArthur Study Bible, and they did a tremendous job. They even have a large selection of colored leathers and orange appeals to me.

Then, in the last year or so, I heard Mike Abendroth mention on his podcast about him getting a really good Bible from Evangelical Bibles. He said it was a handcrafted NASB Schuyler Quentel edition. I texted him for the details and he sent me the links. I was immediately overcome with awe of those Bibles. The 220 buck asking price, however, was steep. I fluctuated between weighing spending the money to do the rebinding on the old Bible, which would had been a bit cheaper, against adding an extra 50 dollars or so and getting a new Schulyer.  I finally landed on the Schuyler.  I began to save my money by selling off commentaries and books in my library that I now had on Logos. It took me a number of months, but I was finally able to secure one, and it is absolutely gorgeous.

As one can tell by the picture at the top, I picked up the firebrick red version. Everybody I know carries a black, tan, or burgundy leather Bible, so I wanted one that stood out. As soon as I unpacked it and breathed in that new Bible smell that came wafting up from the box, I knew I had a thing of elegance in my possession. Picking it up, I can just feel the quality in my hands: supple, natural grain goat leather, the stitching around the edges and the spine, the way it lays open on the table, it is a piece of art in Bible making.

While the exterior of the Bible is breath-taking, it is the interior that is truly amazing.

When I was weighing my options between getting my old MSB rebound and spending a bit more to purchase a Schuyler, I was telling an acquaintance of my choices. He told me that most folks only consider the exterior of a Bible, what it looks like and whether or not it is covered in a good leather. Rarely do folks think about the interior of the Bible, what kind of paper its printed on and the way the text looks and is laid out on the page.

We just so happened to be standing in the church’s book store when we were discussing Bibles and the guy grabs a cheap edition off the shelf and opened it up. He held a single page against the light of the store. “A Bible printed on cheap paper will have what are like little pin pricks all over the page, like this one here.” Sure enough, I saw the little pin pricks on the page. He went on to explain that the bulk of mass produced Bibles that folks pick up in their local bookstores are printed on that low quality paper. A really good Bible paper will not have any of those pricks or maybe just a few here and there on a page.

The first thing I did when I unpacked my new Bible was to hold a page up to the light. There wasn’t a prick one anywhere to be found.

But even more wonderful is the way the page actually looks. 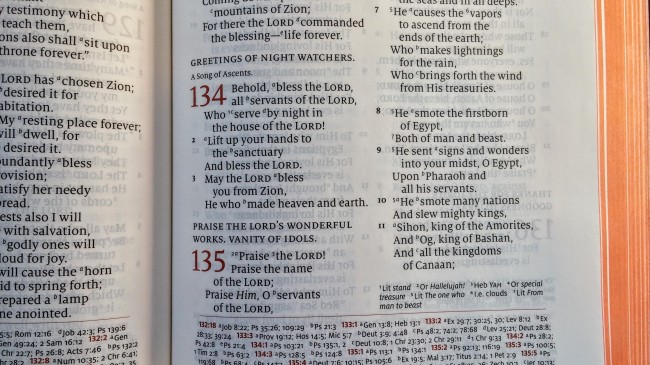 The font is 11 point, and the letters crisp and bold and easily read without my reading glasses. Also, each chapter is a red number matching the exterior color of the Bible itself. And it is not a “Words of Christ” red letter edition, another feature I insisted upon.

And the one fun perk is the edge of the Bible. If you close the Bible and look at the paper edge, there is the standard gold tinting. Once you open it and fan the pages, the edges turn firebrick red. 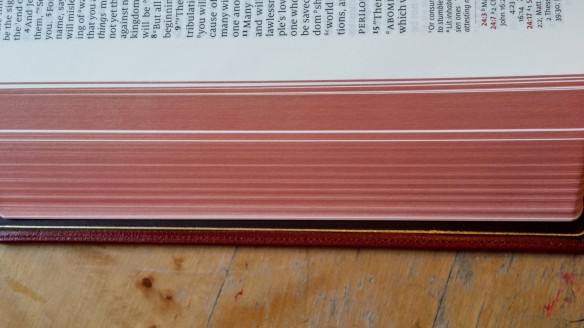 I cannot be more thrilled with this Bible. I actually get excited anticipating studying the Scripture. That is why I would encourage all believers to consider making a worthy investment in a good, well-made Bible. Evangelical Bibles have more than just this version, though I couldn’t recommend it highly enough. Check out their page and look over their ESVs, KJVs, and the NKJVs. There are a number of excellent choices.

Men and women have bled and died to preserve God’s Word for us. We hear it preached every Sunday, and we are supposed to do our daily reading from one. While I am grateful for the mass production of relatively inexpensive Bibles of all shapes and sizes and editions because God’s Word is spread far and wide, if we really maintain a high view of Scripture, why not get a really good one that is worthy of the God who gave us His Word? It may take saving a little every couple of weeks from a year’s worth of paychecks, but I think it would only serve to elevate your love for God and Scripture.

15 thoughts on “May I Exhort You, Dear Christian, to Invest in a Well Made Bible?”