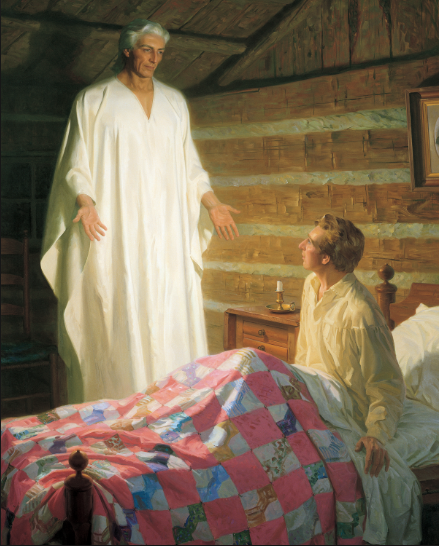 The leadership of the Mormon church recently changed their policy regarding parents of gay children.

Children of parents who identify themselves as lesbian, gay, bisexual, or transgender may now be blessed as infants and baptized in The Church of Jesus Christ of Latter-day Saints without First Presidency approval, President Dallin H. Oaks announced Thursday morning, April 4.

In addition, the Church will no longer characterize same-gender marriage by a Church member as “apostasy” for purposes of Church discipline, although it is still considered “a serious transgression.”

The policy was changed by a divine revelation as God supposedly guided the leadership,

the changes reflect the continuing revelation that has been a part of the modern Church since the Restoration.

“These policy changes come after an extended period of counseling with our brethren in the Quorum the Twelve Apostles after fervent, united prayer to understand the will of the Lord,” wrote President Russell M. Nelson and his counselors in the First Presidency, President Oaks and President Henry B. Eyring, in the statement.

Note the words, continuing revelation. Al Mohler then discussed that policy change on his Briefing podcast and stated in a tweet,

Mohler is dead wrong about that difference. While certainly the polytheistic pseudo-Christianity of the Mormon church is radically different from historic, orthodox Christianity, when it comes to continuationism, the leadership of the Mormon church receiving direct, divine revelation is really no different than evangelicals claiming they receive direct, personal revelations. In response to Mohler’s tweet, I stated,

Unsurprisingly, there were a number of naysayers who sternly disagreed with my comment. One individual wrote in response that it is absolutely untrue that any continuationist would equate his or her gift of prophecy with Scripture. Another opined that every SBC pastor he has known insists God spoke to them by “calling” them to the ministry. Still another person echoed that every pastor received a divine revelation from God to pastor the church where he currently serves. One guy was upset that I would slander the good name and reputation of Beth Moore who regularly shares in her sermons how God tells her stuff.

The common misconception among average Christians is that the gift of prophesy is very much active in today’s church. The gift is meant to be a divinely encouraging word to other believers, rather than some new divinely given revelation. Usually it is equated with preaching by a pastor or a teacher. Additionally, any stirring or prompting of believers to some spiritual duty is God “speaking” to them, but that speaking is never equated to new revelation.

But that misconception demonstrates a profound ignorance of theological categories and a sloppy application of biblical terminology. It really stems from a deficient understanding of what prophesy was in the Old and New Testaments and the role prophets and apostles played when exercising the use of the gift of prophesy.

In general terms, prophesying in the Old and New Testament may be defined as
the supernatural, Spirit-given communication of God’s will and word to God’s people. The prophetic gift is always a supernatural gift. It is not merely heightened human insight, nor can it be equated with today’s preaching in the pulpit. TMS Journal, Fall 2014.

There are a couple of important highlights from that citation. First, the gift of prophesy must be distinguished from preaching. One of my more persistent Twitter detractors was vehement that prophesy is the same as preaching from a pulpit. But throughout Scripture, preaching is proclaiming the Word of God already revealed through prophets and apostles who wrote it down and is now available for all to read.

A second highlight is that prophesy is a divine, supernatural, Spirit-given communication of God’s will and word to His people. Again, throughout Scripture, both the OT and NT, those individuals anointed with the prophetic utterance were granted a divine revelation. That revelation was either inscripturated into the 66 books of our Bible or spoken to God’s redeemed people as a word of exhortation or direction. Never was prophesy meant to convey vague, whimsical musing that grant some person the ability to ascertain God’s otherwise secretive will his or her personal life.

As much as Christians will swear that their Spirit induced declarations are not direct, authoritative revelation from God, certainly not the kind that the Mormon leadership would receive, they most definitely speak as if they are. Regardless of what Al Mohler may think, the “God told me” or the “Spirit led me” rhetoric is found in practically every corner of evangelicalism. From ultra-fundamentalist Chick tracts (see for example his Reverend Wonderful tract in which the bold Christian receives divine direction to evangelize a celebrity ecumenist preacher) to the daily nonsensical superstitious soothsaying peddled at the Charisma Mag and Elijah List websites as spirit-filled Christianity. An even more recent illustration comes from Mike Lindell, the My Pillow salesman, who spoke at CPAC 2019 about how he knew God had miraculously appointed Donald Trump to be president. In fact, the first words out of his mouth was him telling the audience that God had given him the speech he was about to deliver at three in the morning.

This continuationist view of prophecy is not contained merely among fringe internet ministries or charismatic denominations like the Assemblies of God or the New Apostolic Reformation, but also among traditionally non-charismatic groups like the Southern Baptists. The members of the SBC have been indoctrinated to think in the way of the Mormon prophets by such teachers like Henry Blackaby and his Experience God books. Blackaby teaches that Christians should expect the same divine direction that the Old and New Testament people experienced. The only way Christians can have a genuine relationship (experience) with God is if He is allowed to direct our everyday lives with specific details that are not particularly revealed in Scripture. In other words, by divine, personal revelations. An excellent review of Blackaby’s experiencing God view was written up by Dan Phillips and can be found here, Part 1 and here, Part 2.

Lifeway-made celebrity, Beth Moore, is probably the most prominent public example of an SBC personality who claims to have a direct conduit to God who channels divine revelation to her on a frequent basis. She is notorious for her infamous “hair brush” story, in which she claims God told her to brush the hair of a disheveled stranger as she waited for a plane at an airport. In the preface of her book, When Godly People Do Ungodly Things, Moore writes the following,

Moore is clearly saying that the book was a message given to her directly by God, for if she had not obeyed and written it down, the rocks in her yard would have cried out. Now, she does give herself an out in the following paragraph when she writes that she is not saying her book is divine revelation. But if the message was assigned to her by God, even delivering it to her while she sat bug-eyed at what she read, and if she had not written it down the rocks would have cried out, how can that book be anything else BUT a divinely given revelation?

Contrary to what Al Mohler tweeted regarding Mormons and Evangelicals, while they may be divergent religions, both groups are identical when it comes to their acceptance of the gift of prophesy and continuing revelation. Evangelicals may soften the severity of what they are believing by tacking on the disclaimer, “I’m not saying my message is on the level with Scripture,” but if they are saying God is revealing a special message or some aspect of His will to a person, how could it not be of the same authority as Scripture? Either the message is infallibly coming from God or it is not. That there are great swaths of pew sitting Christians who can’t tell the difference is troubling. Even more concerning are those who believe those personal revelations are valid and blast against anyone who would question their legitimacy.