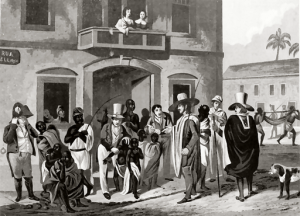 It has been a while since I have visited with Chaz Bufe and his 20 Reasons to Abandon Christianity. I am coming down to the final handful, and with this post I take a look at Chaz’s attempt to charge Christianity with the horrors of slavery that has been prominent throughout the history of humanity.

15. Christianity sanctions slavery. The African slave trade was almost entirely conducted by Christians. They transported their victims to the New World in slave ships with names such as “Mercy” and “Jesus,” where they were bought by Christians, both Catholic and Protestant. Organized Christianity was not silent on this horror: it actively encouraged it and engaged in it. From the friars who enslaved Native Americans in the Southwest and Mexico to the Protestant preachers who defended slavery from the pulpit in Virginia, the Carolinas, and Georgia, the record of Christianity as regards slavery is quite shameful. While many abolitionists were Christians, they were a very small group, well hated by most of their fellow Christians.

The Christians who supported and engaged in slavery were amply supported by the Bible, in which slavery is accepted as a given, as simply a part of the social landscape. There are numerous biblical passages that implicitly or explicitly endorse slavery, such as Exodus 21:20–21: “And if a man smite his servant, or his maid with a rod, and he die under his hand; he shall be surely punished. Notwithstanding, if he continue a day or two, he shall not be punished: for he is his money.” Other passages that support slavery include Ephesians 6:5, Colossians 3:22, Titus 2:9–10, Exodus 21:2–6, Leviticus 25:44–46, 1 Peter 2:18, and 1 Timothy 6:1. Christian slave owners in colonial America were well acquainted with these passages.

Christianity sanctioning slavery is a common objection in atheistic literature; but it is fundamentally flawed.

First, the charge is extremely narrow in its scope by only aiming to condemn Christianity for its participation in slavery even though slavery has been practiced through out all of history, across all people groups, both religious and non-religious.

Secondly, the objection is generally limited to slavery as it was practiced in the pre-Civil War era of the United States. That is important to note, because the voluntary servitude permitted by the Old Testament Torah for the purposes of securing financial stability in Israel’s society is a far cry from the slavery the western world engaged during 18th and 19th centuries when primitive peoples were kidnapped from their homes and families and replanted to other hemispheres of the earth.

Now, it is certainly true that Christians were involved with the sin of slavery, and many Christians, as Chaz points out, attempted to justify their involvement with slavery by appealing to Scripture. But the wrong-headed use of the biblical descriptions of slavery in both the Old and New Testaments by Christians, who should had been repenting of such attitudes rather than erroneously defending them, does not mean the Bible endorses the practice of human chattel slavery.

Those biblical passages listed by Chaz that he claims endorses slavery have an historical and theological context all their own, and it is beyond the bounds of simple literary linguistics to read back upon those texts a foreign context that is a couple of thousand years removed.

Putting aside a detailed exegesis of each of those passages, what needs to be noted is that Scripture records directives not only for slaves to be faithful to their masters, but also for masters who are to be respectful and merciful to their slaves, something unprecedented during the NT writing. Paul certainly did not encourage slave rebellions, for such an action would be foolish; but by laying down divine principles for living out a Christian life by addressing both slaves and masters as equals before God in Christ (Galatians 3:28), the Bible embeds within its pages the seeds of eliminating slavery all together which is what we see happen over time in societies where Christ is held high.

Chaz, like most atheist critics of Christianity, is conveniently dismissive of two important facets on the history of slavery: The impact of Christianity on ending slavery and the atheistic driven racism that followed after the development of Darwinian evolution.

First, Christians over the centuries have recognized the biblical teaching that men are created in the image of God. So even though there were Christians who attempted to justify their sinful practice of keeping slaves, there were many more who saw slavery for what it was, a defacing of the image of God in a person. Chaz is quick to ignore the work of such men as George Whitfield, Samuel Davies, John Newton, John Elliot, William Wilberforce, who campaigned nearly 16 years to have the slave trade ended, and the Moravians who sent missionaries to the Caribbean to evangelize the slaves and their owners. Many in the Church were active in confronting slavery and rebuking society for its sinfulness so as to have the practice eradicated in western society which was prominently Christian.

Then second, the atheism experiment with racism went far beyond the owning of slaves to the deliberate killing of ethnic groups. Atheistic scientists, fueled by Darwinian ideas, hunted the more backward, primitive societies in our world to locate “missing links” to be examined in their university laboratories. The Australian Aboriginals, for instance, bore the brunt of a lot of the evolutionary thinking that tribal peoples were less evolved.

Regardless of which group is the perpetrator, slavery is a demonstration of man’s inhumanity to man. However, to say Christianity “sanctions” slavery is preposterous. On the contrary, Christianity has always been on the forefront leading societies to confront the evils of human slavery. That is something the atheist, like Chaz, should be thankful.