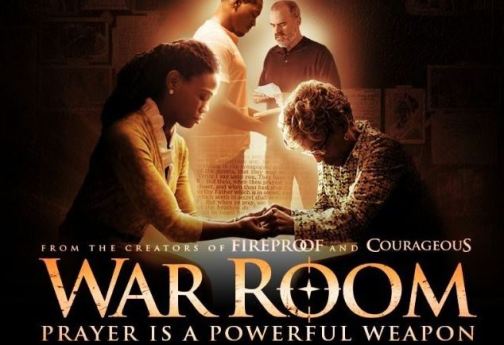 I realize this review is several months too late, but seeing that War Room just released on DVD, I’ll just have to be behind on the uptake.

I wanted to see this film because it was so critically panned by many of the discernment folks who circle around in my immediate theological orbit. Reading all the reviews warning people away from it only raised my interest, and knowing how I am a sap for mediocre, Christian melodrama, here we are.

War Room is the latest offering from the Kendrick brothers film making duo. They have brought us such previous films as Fireproof and Courageous, both of which I also reviewed (and I liked). I will say at the outset, as the Kendricks chug along with their movie making hobby, their work remarkably improves which each new release. The story telling, the acting, and the overall production value continues to get better and better and it shows with War Room.

War Room tells the story about Tony and Elizabeth Jordan, a well-to-do couple living the good life in the South Carolina-Georgia area. Tony has a fabulous job as a pharmaceuticals rep., and Elizabeth is a decent real estate agent. They have an adorable little girl and live in a big, fancy house. The only problem is that their marriage is souring and the two are drifting apart.

Tony is something of a bossy husband, and when he is home, he is focused only on himself. Both of them bicker and snip at each other which only strains their relationship further. Elizabeth is beginning to resent him for it, and Tony is genuinely considering an affair with another woman at the company where he works.

One day, Elizabeth gets called by an older lady named Clara Williams who needs to sell her house. As she shows Elizabeth around, she tells her about each room in the house and what it has meant to her. She then tells Elizabeth to come back the next day and she will show her her most favorite room, and of course, that is revealed as a makeshift closet Clara calls her war room, because it is where she goes to pray and do battle with the devil. She then asks Elizabeth to meet with her regularly and she will show her how to do real battle with her personal enemies.

Elizabeth is initially reluctant to take up Clara’s war room challenge, but as her marriage continues to be strained with Tony, she becomes more serious and turns her clothes closet into her “war room.” As she prays for her husband and marriage, her attitude begins changing toward him. She begins serving him and treating him with respect, and when Tony is fired from his job for allegedly fudging sales numbers, the forgiveness and love she had been showing her husband draws him back to loving her and eventually giving his life fully to the Lord. 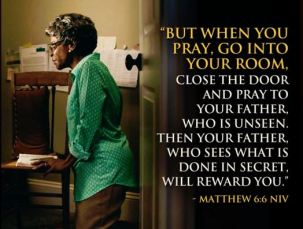 Contrary to the alarmists claiming the movie teaches contemplative prayer and is filled with mysticism, I thought it was rather good with what it was trying to convey. As I told my wife when the credits began rolling, it was better than I had anticipated.

Now, that is not to say I don’t have my criticisms and concerns, for I most certainly do (and I believe they are important ones as I will explain in a moment), it is just that the movie will not rend your soul in any fashion as was suggested in a variety of hysterical blog articles going after it this past summer. Even the appearance of false prophetess hack, Beth Moore, was underwhelming. The funny thing about her scene is that she plays the boss of Elizabeth and participates in the brief banter with the women talking about how hard it is to submit to their husbands. I snorted at that one.

Honestly, there are a few things commendable in the movie and the message it puts forth. So let me lay out my pros first, and then I will outline my cons.

– First of all, the focus of the film is the urgency of praying. I think the movie provides us a splendid reminder of our need as believers to bring our burdens before the Lord. I know for myself, that was a convicting theme from the film for me, and it is challenging to consider how I need to reignite my prayer life before the Lord praying for my wife, my family, and the ministry God has given me.

– I appreciated the racial harmony the film presents. Even leftist HuffPo recognized the fact that the central cast was a black family. Racial issues was not at all addressed in the movie, but knowing the filmmakers live in Georgia and the racist history of that state, it was encouraging to see black and white folks living together and participating in normal, everyday activities without the discussion of race relations.

– The Gospel was presented well on a few occasions. There is also an emphasis on surrendering to the Lordship of Christ and giving God our all in everything we do.

– I also appreciated the dignified way Elizabeth and her husband Tony confess their sin to one another. When Tony reveals the real reason for losing his job, stealing drugs from his company, he is shown not only just confessing his sin, but returning the drugs to his bosses, risking prosecution.

Now, with those few pros in mind, let me turn my attention to my cons, or better, my concerns with the movie.

– Clara is presented as a mystical, Yoda-like figure who has learned how to tap into a higher, spiritual dimension that provides her a special authority over the spiritual realm. In one scene she stops a mugger in his tracks, scaring him away “in the name of Jesus.”

I thought her character was unnecessarily flamboyant, more of a cartoonish stereotype of how black ladies are often portrayed in cinema throwing out spiritual platitudes and mantras. Like Aunt Esther from the old Sanford and Son television show.

I think it would have been better if she had been portrayed as a gentle, quiet lady who simply walks in the Spirit and disciples Elizabeth in godly femininity.

– The movie shows a territorial view of spiritual warfare. The idea being that devils have created strongholds within homes, neighborhoods, cities, and even nations, and Christians must take those territories back by confronting those devils and driving them away. In the one pivotal scene when Elizabeth realizes her need to take her war room praying seriously, she walks through her house trash talking the devil and casting him out of her house.

That territorial view of demons is probably the worst theology in the movie. The last scene is Clara taking authority over “enemy” spiritual territory by praying up an army of additional war room warriors by misapplying 2 Chronicles 7:14. Ironically, realistic statistics would tell us she and the African-American community would vote for leftist, Democrat politics that would oppose and undermine everything for which she prays.

Territorial spiritual warfare is an unbiblical perspective that only serves to bind Christians to misconceptions against what true spiritual warfare really is. Such things as the importance of crucifying the flesh and thinking upon truth with a sober mind. (BTW, if you want a decent study on the topic of spiritual warfare, see pastor Jim Osman’s book, Truth or Territory).

– There was no mention of human sin or the consequences of our sin nature causing problems in Tony and Elizabeth’s marriage; it was the devil, who had to be dealt with like an invading army.

The devil is viewed as having the ability to genuinely oppose the purpose of God if Christians allowed him. In order for him to be defeated, the devil must be recognized as an enemy combatant who is personally involved with messing up a person’s life. He is blamed for bad marriages, and everything wrong in people’s lives, rather than recognizing the problem is that husbands and wives are probably not saved nor are they walking in the Spirit.

Instead of the scene with Elizabeth trash talking at the devil, I think it would have played better if she was talking to the Lord, confessing her sin of not loving Christ and her husband, asking God for His help, and announcing from that point onward, she wants Jesus in control of her life.

I will admit my points of contention can be considered significant, but I don’t believe they so ruin the movie to make it unwatchable with those who exercise a bit of discernment. I can only hope the Kendricks continue to improve the offerings they bring forth in Christian film. Their productions are a long way from those dreadful Thief in the Night movies.

I am, however, still holding out that they will make a movie addressing homosexual sin and same-sex marriage. The story of a gay man who is “married,” but is gloriously saved, leaves his sham relationship, and marries a woman. Of course that may be difficult seeing that Sony Pictures is now involved with distributing their movies.